Chilkoot Trail was a route used by stampeders during Klondike gold rush over 100 years ago. The stampeders would come by boat to Skagway, AK, and head to Bennett, BC via Chilkoot Pass, the rare ice-free pass in the area. From Bennett they would then build boats and attempt to sail to Dawson on Yukon River. Several tent cities were established along the trail, and artifacts are still scattering around now.

There's a quota of 50 hikers per day that get over Chilkoot Pass. Fortunately the demand wasn' too high. I called Parks Canada a month prior to our trip, was put on wait list at first, but soon got two spots for Aug. 23rd. Permits should be picked up at ranger's station at Skagway.

We finished our Donjek hike on Aug. 21st, and left for Skagway from Whitehorse via bus the next morning. We booked both the bus and the train back to Skagway from Yukon Alaska Tourist Tour. It came down to about 160 USD per person.

There's a US Immigration at Fraser, BC. Because of my foreigner status, the bus had to wait for half an hour for me to clear immigration (sorry). We arrived at Skagway at noon, picked up our permits and had a cozy rest day at this small town packed with tourists coming off cruises.

During our Donjek hike, Rani and I realized that neither of us was fond of waking up early. So we conveniently booked the Dyea-Chilkoot Trail Transport at 10am. Dyea is a short ride from Skagway and we started the hike at 10:30am. The 12 miles from Dyea to Sheep Camp is not difficult. After Donjek, that was a welcoming change. We arrived at Sheep Camp at around 4:30pm, and there were already over 30 other hikers there. Fortunately there were enough campsites. Campsites at Sheep Camp were platforms but didn't have hooks. It is mildly inconvenient to pitch my Fly Creek tent.

At 7 pm, a ranger came to camp and briefed the weather forecasts and trail conditions going up Chilkoot Pass the next day. According to the forecast, it's highly likely that it would rain for the whole day. Having had a fairly easy day, we were not too concerned about it, and decided to push to Lindeman the next day.

We got up at 6am and surely it was raining. By the time we gathered our stuffs and headed to the shelter for breakfast, we were the only ones left at camp. We left Sheep Camp at 8am and headed towards the pass.

We were making good progress at the beginning. Biggest complaint was that it felt too warm wearing the rain jacket. After the scales though, temperature dropped down significantly and we started scrambling up the boulders. It took us an hour or so getting over the boulder field and we were supposed to see a shelter on the pass. It became quite foggy and we couldn't see beyond a few feet away. I was worried that we missed the shelter until we heard the humming sound. It was the electric generator at the ranger's house, and the shelter was right next to it. We walked into the shelter and it was packed. Only then did I realize that I felt really cold. The nice lady from Parks Canada put a heater in the room so I was able to warm up a little bit. It was funny that of all the hikers we saw, everyone looked miserable. It just showed that there's still a lot to be desired from the waterproof fabric.

We stayed in the shelter for a little less than an hour and decided to move on. I was still feeling a bit cold but thought once we started hiking again it should be fine. So we started our hike down the pass. After the Stone Crib, the terrain got easier, but still above tree line and feeling chilly. At around 2pm, we passed Happy Camp, where most other hikers would spend the night. Three hours later we arrived at Lindeman. Lindeman campground is huge. Upper and lower part are 5 minutes' walk away, and each has a cooking shelter and at least 20 campsites. Apparently the standard 5 day itinerary would skip Lindeman and camp at Bare Loon Lake on the 4th day, so we were the only two people camping at upper Lindeman for the night. It's a shame that such a nice campground was not utilized by more people.

The next day we made it to Bennett at noon after three hours of hike, barely breaking a sweat. We boarded the train that left for Skagway at 3:10pm Alaska time. The next day we hopped on the ferry to Juneau, and from Juneau took the flight to Anchorage. 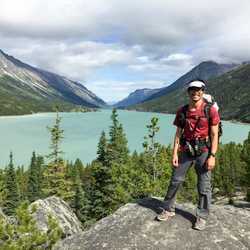 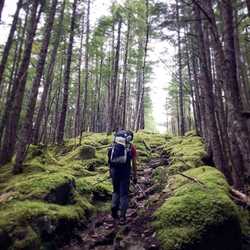