QiZangGou(七藏沟) Traverse is a 60km trek located in northwest Sichuan Province. I did the traverse from July 15th to July 17th in 2014.

Jump-off town for the trek is either SongPan(松潘) or ChuanZhuSi(川主寺). Because of the close proximity to JiuZhaiGou(九寨沟), one of the most popular tourist attractions in China, both towns are swarmed by tourists. ChuanZhuSi is closer to the trailhead, but it's a smaller town where everything from hotel rooms to bottled water is overpriced. Comparatively, SongPan is a much more pleasant town to spend the night in.

There are a few daily buses to either town that depart from Chengdu(成都) Chadianzi(茶店子) bus station in the morning. Bus ride takes 8 hours. Roads are paved and it's generally considered a safe ride. Landslides occasionally happen as an aftermath of the 2008 earthquake. Local buses run between SongPan and ChuanZhuSi frequently every day.

From ChuanZhuSi you need to take a taxi to KaKaGouKou(卡卡沟口) trailhead. Just stand on the main street of ChuanZhuSi for 5 minutes and you will be approached by at least 10 taxi drivers. There are no meters in the taxi, so the fare needs to be negotiated beforehand. It should not cost more than 100RMB, but be very specific of where you want to go. This may be hard if you don't speak Chinese. Even as a Chinese native, I was scammed by the driver who refused to drive further before we reached the trailhead unless I paid more. I said no to the driver and as a result had to walk for 2 hours before I finally got to the trailhead.

At the finish, you will pass a couple of villages, and the trek eventually hit S301 provincial highway at ShangMo village(上磨村). It is less than 10km away from ChuanZhuSi, and thumbing a ride back is easy. QiZangGou is not far from NianBaoYuZe, another hike located at the border of Qinhai and Sichuan province. If you have time consider doing both on the same trip.

Average altitude of the hike is around 3500m, so be sure to acclimatize before you set off. Other than the altitude, the trek itself is not hard. There are two high passes over 4000m, but as long as you take your time, they are quite manageable. The whole thing can be completed in 2-4 days.

This is an unofficial trail. There are many side trails used by herders and herb (traditional Chinese medicine) collectors. It is worth taking a GPS with you, as a good TOPO map is hard to come by. Trailhead at KaKaGouKou may be hard to find without a coordinate. Best maps I found online are these:

The maps are barely sufficient for navigation purpose. On the second map at the campsite before HongXinHai(红星海), turn east, climb the 4291m pass and then descend into the valley. The route suggested on the second map is a shorter alternative that skips the last pass.

I used the GPS track from Foooooot.com, and found it quite accurate. 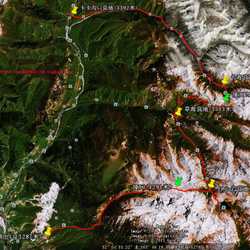 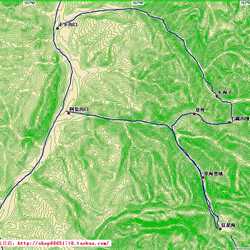